Conceptual poems: The Ballade about yourself

Questions in the air

Who are capable of it and who dares?

What is Something, When Everything Can Be Won?

Is There Nothing in the Wrong Hand?

Can Everything be held in one hand alone?

Whose is the hand's control in the game?

Is it a credible game manager?

However, are you not yourself without participating?

Or is this to choose Nothing and wasting your chance?

Does nothing play a role, and is nothing in itself enough?

Can you seize yourself out of nothing without falling?

Are you then a wishful thought or a nightmare?

Who can, who dares and who turns their backs to?

One day I find myself wearing brown monk's robe.

Bald and with a naked branch laid in my hands,

I sing stanzas, which not even I myself have known before.

Stanzas that seem to multiply and form themselves

Just right next to my own physical presence.

An independent world of stanzas growing and piling up,

excites me to the absolute breaking point,

and triggers in the creation of a grotesque performance.

A performance that in a glance of recognition

lets itself be revealed as a double-edged sword,

which in fine but painfully cut cuts a piece of myself,

and a piece of this world, that I am made of.

After years of protracted, confusing and exhausting walks,
non answered reverent prayers, unfulfilled hopes and eternal longings.
After many long attempts against a non breakrable wall
and after time after time to have appeared in new disguises,
I walk now only with eyes focused on the red ground under my feet.

With a flabby purple cloak put on my naked overdue body,
I move to the sound of deep throat-humming sounds tones rhythmically forward,
dragging the family's heavy burdensome handcart after me -
an involuntary heritage as life's heavy load and absolute judgment.

Bended frontover and with an unprecedented happy feeling of indifference ,
leave I with all caution my measured steps in the dust,
a volatile trail through this maze of winding alleyways,
whose nearest exit on both attractive and repulsive way,
looks like being an final parting.

Hovering in uplifting  warm aircurrents,
I fly expectantly and freely through the time,
freedom, oh wonderful freedom!
Only a winner wins freedom,
and the prize of the freedom is to be a  winner.

Who Nothing ventured is no winner,
nothing is namely nothing compared with freedom,
the free has ventured everything to avoid the nothing.

Overcome ones own fears lifts up the spirit to be light,
to stare the predator in the eyes gives a predator force,
Then let all humility be the a feather in fierce winds,
and let it drown in powerful rain showers,
knocked to the ground by hail and icy cold.

Oh freedom! Ain't compareable  with nothing,
only  everything is suficient to measure by,
and to fight the principles of mediocrity gives wings.

You'll get spirit united with body in new light altitudes,
nothing disappears and everything is a new creation,
oh freedom!

The moment
Heavy things arise in sudden flashes around me,
dissolves, fades in and disappears in the bustle of a blurry world.

Floating incomprehensible voices circulate around me,
the unbearable noises of small sounds in the echo's continued resounding emptiness

Nothing passes me unnoticed and insignificantly, while everything stay hanging in the air around me, loaded with meaning and life.

An unspeakable eternity loaded with a mystery, that make the same eternity to disappeare at moment of its arisement.

an inner pulling through me

a warm wind through my freezing body,

escalating sounds of unbearable echoes in my head,

the space around me expands uncontrollably

In fetal position  I'm trying to protect myself, 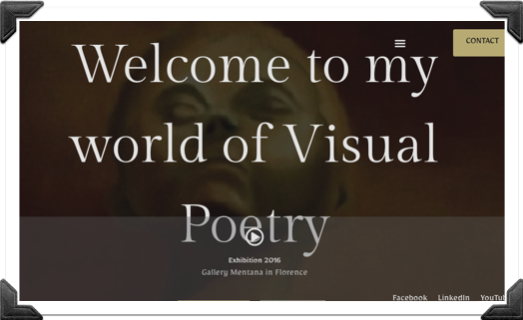